February 4, 2020 In Uncategorized By admin 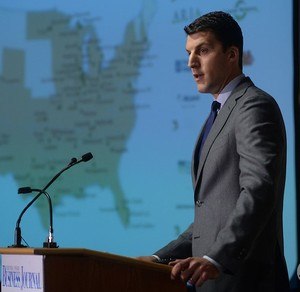 Rex is a Managing Director at Juniper Advisory, the Chicago based firm that specializes in health system mergers and acquisitions. They’ve worked with over 200 hospitals to form some of the better known and most highly regarded systems in the U.S. He’s also on the investment committee of Purple Arch Ventures, a side endeavor he’s enjoyed since business school at Northwestern.

You joined Juniper in 2009, tell us what’s changed at the firm and industry since then.

Our team was smaller and the transactions were more straight-forward. Most of our assignments were to assist financially challenged community hospitals join a larger partner. The motivation to combine was mostly out of financial necessity.

That changed pretty dramatically following the passage of healthcare reform and beginning in around 2012. Our clients since, more often than not, are well positioned strategically, well managed, and successful independent providers. The motivations became much more aspirational – how can we best keep our population healthy and provide the highest quality care to patients. That made our job more fun as it meant they had more options in terms of type of partner, transaction structure, and controls afforded. So our team has grown and the transactions have increased in complexity, which we enjoy.

How do you see the landscape of your industry changing in the next decade?

The hospital industry is still one of the more fragmented in the country for its size. Most believe that better network coordination is going to be necessary to improve the cost / quality equation. Our sense is that will occur both in horizontal consolidation – the formation of regional centers of excellence, and vertical – controlling the continuum of service lines and levels of care. That’s particularly important under risk based contracting.

Anything that concerns you in the healthcare marketplace?

For sure – we have some big challenges and issues to tackle. Cost, accessibility, and accountability are all huge topics. As a patient recently, I was amazed with how much of the onus of care coordination is still placed on the individual. Lining up tests, documenting the results, and tracking those results over time is almost entirely the responsibility of the patient.

Despite world class physicians operating at a major academic medical center and using the latest instance of MedTech EPIC, the patient still bears at outsized burden. I feel fortunate that I can generally keep up with what’s going on since I do this for a living. To the 99% not in this field, though, it must be unimaginably complicated. Add in the issues of pre-existing condition insurance coverage and escalating medical bankruptcies and it’s an overwhelming set of challenges.

Also, just as income inequality is growing in this country, access to healthcare is also becoming unequal (and unfair). They ‘haves’ are doing great – well capitalized, well run, producing good outcomes. The ‘have nots’ are grim – as you’re seeing in the news, wide swaths of the country have lost access either through closure, bankruptcy, or something equally draconian. Our experience in the M&A world is that many of these fates are avoidable if partnerships are designed and approached in the right way.

Switching topics, which business leaders do you admire most and why?

Those that have a heart and lead with more than the next quarters’ performance results in mind. Good corporate citizens, doing right by their customers, employees, and the world more broadly. Some that come to mind: Yvon Chouinard at Patagonia, Howard Schultz at Starbucks, Graydon Carter at Vanity Fair, Toby Cosgrove at The Cleveland Clinic.

Certainly those that took risks and advanced journalism like Hunter S. Thompson, David Foster Wallace. In terms of subjects and style, I love Nick Paumgarten at The New Yorker, Joseph Epstein, Michael Lewis, Reif Larsen. In our corner of the hospital industry people like Ilana Yurkiewicz and Atul Gawande‘s work looms large.

I’m reading Harry Potter for the first time now alongside my 6 year old daughter. JK Rowling’s story of entrepreneurship and overcoming failure is pretty incredible. I just finished Tara Westover’s ‘Educated’ and liked that a lot.

What’s up with this venture investing I see you doing?

A couple things: (1) I’m skeptical of giant corporation’s commitment to doing the right thing, (2) I don’t love the risk of owning assets subject to global dictator’s saber rattling, (3) its really fun to be a part of something that’s growing, employing people, and making a cool product that customers like. It’s too early to tell if I’ll be any good at it, but I’m enjoying dabbling here and there as a hobby. So I find the work you’re doing here to foster the bug to create new businesses really important.

What types of start-ups or founders are you most interested in?

I try to keep it simple. I’m not going to find or be included in the next Airbnb, Uber, Facebook unicorn-type angel round. I’m not that smart and don’t have the credentials in that world. Instead, I like to stick close to home and invest in people I see making a difference and doing neat things and solving problems.

So local apartment complex deals – investing capital to improve a building, increase occupancy, and treat the tenants really well. It’s a no brainer and there’s much more alpha in doing that than going toe-to-toe with sophisticated REITS all analyzing the same projects. Same goes for small family businesses that lack succession plans where a capable operator can modernize a business and take it to the next level. Again, way below the radar of a major PE fund. We’ve invested in a local food manufacturer that’s conscious and ethical about ingredients and the environment – and (hopefully) earning a strong return. Those are the type of things that hold the most appeal and present the greatest opportunity.

Brad Johnson and Grayson Morris at the Alternative Investor podcast hit on these themes really well. I’d highly recommend checking them out.

It’s been nice talking to you. Let’s do it again.