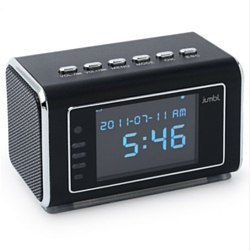 Hidden cameras have always had a bad rap. You can thank a few churlish children and a handful of adults who don’t know how to talk to women for that. Contrary to their reputation, hidden cameras are more often used by responsible individuals looking to

The first hidden camera we’ll have a look at is the Jumbl JU-SC02B. I’m a huge fan of the day to day functionality as an alarm clock, which is still inconspicuous in households where taking your phone to bed is a no no or for those with significant others who may not be fond of being recorded. The features that make this hidden camera one of the best are the motion sensitive recording and the automatic low light infrared recording.

Both these features make it perfect for use in the home or in the workplace when you’d like to know who has been in a given space. Using portable SD memory cards, a little like a digital camera, the Jumbl’s footage can easily be moved to computers or stored elsewhere. You can toggle between shooting video or still images as well depending on your preferences and needs. This is a pretty affordable home surveillance product. This camera has everything you’ll need to keep an eye on a bedroom or workspace. 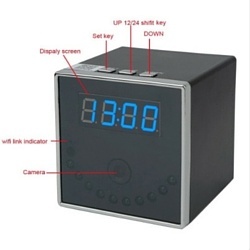 If your living arrangements are a little more networked, a similar product that you can use with your smartphone is the Toughsty hidden camera alarm clock. With a panoramic view of 140°, this hidden camera can capture actions happening throughout a room. With Android and IOS compatibility, as well as WIFI connectivity, this hidden camera offers a discreet means of checking on what’s happening on the home front from wherever you may be — at work, on vacation, on the can, no worries.

Like the last product, this hidden camera also functions as an alarm clock with an FM radio, keeping its recording activities discreet and providing everyday utility. This hidden camera does offer the ability to store footage on SD memory cards like the previous clock as well, and can save space with its motion sensitive recording option. The ability to record in infrared for night vision is also a useful feature. Having seen this product and the plentiful features it offers, I’d be remiss not to say it qualifies one to keep on your list. 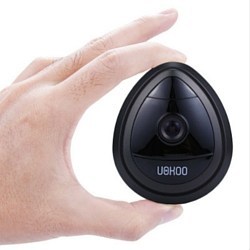 Another discreet camera for a networked house is the UOKOO Portable Mini IP Camera. Easy to install and IOS/Android compatible, this camera, while not exactly a hidden camera, can send high definition images to your phone or tablet with a few quick strokes. It’s great for checking on the house while you’re away. Motion detection and email alerts mean there’s no need to watch through hours of video to see what you need to see. Selling for $36.99, this camera is an absolute steal that will keep people from stealing from you. While it’s not exactly hidden, it is a discreet camera; but its features and price certainly make it worthy of inclusion on this list — not to mention your consideration. 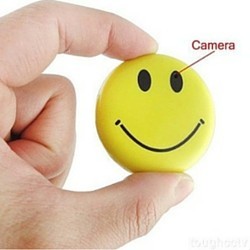 These next two products are more portable, I’d even say wearable, hidden cameras. The first, an 8 GB number made by Toughsty, comes in the shape of a smiley face button. With one hour of battery life, audio and video recording, it’s a decent product, although not exactly as discreet as one might hope. Maybe it’s a little more suited for a rock concert than a boardroom, but it’s perfect for a dressed down workplace. It’s certainly affordable. Its wearability, above all, gives it the bump that it needs to be included here. 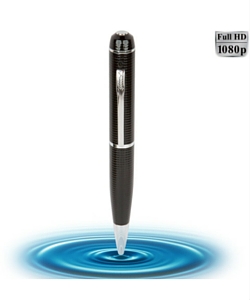 Our final hidden camera is made by AGC Mart, the Hidden Spy Camera Pen. Shaped like a pen, it has discrete written all over it — not literally, though. Clear 720p video capability and compatibility for both PC and Mac computers, it’s perfect for students at lectures or professionals in the boardroom. Capable of recording for up to 75 minutes, it’s not just marketed for these environments, it very well could work in them. Shaped like an everyday object as well, it’s sure to avoid suspicion. While the price tag is a little higher than our other wearable, it’s certainly a little easier to hide and eminently portable. Any list purporting to have the best hidden cameras would be bunk without such an item.

As you can see, when we search for the best hidden cameras, we look at several qualities. It has to be discrete, either small or disguised as an object one would find in a regular house, preferably with some functionality as such a product. The camera should also have storage ability. And, if it can function as a part of your WIFI network, allowing you peace of mind while you’re on the road, it’s also a good product. While you may want to seek legal counsel to assure you’re using the product in a legal manner, as far as what to look for your work is done.