Ever been pregnant? I am right now, for the third time, and it ain’t no picnic (as my mother used to tell me at least ten times a day)! If you have, you’ll know that the night hours are the most uncomfortable time of day. You need the toilet five times a night. You have

The PharMeDoc pillow is made for pregnant ladies. But according to the rave reviews, quite a few people with other needs have been accommodated by it. The most commented on feature is its assistance in relieving back pain. Back pain is a problem that’s definitely not confined to pregnant women. A lot of side sleepers (that’s me) who have frequent neck and hip aches say it’s amazing!

Next, is its huggability (if I can use that word I’ve just invented)! Quite a few men say that the pillow has taken over their cuddling duties! (Cry me a river, guys. Try being pregnant). One lady even puts her new baby to sleep in it. Oh, and as well as all that, a lot of pregnant ladies loved it too! This best maternity body pillow got an 80% five-star approval rating from the reviewers. Not too shabby!

This pillow is a really Good value for money! The J Shaped- Premium Contoured Body Pregnancy Pillow is an affordable way to look after yourself while you sleep. It’s the best value pillow I’ve come across so far and seems to have a lot of fans.

It’s particularly popular with people who suffer from fibromyalgia. And the consensus seems to be that it is big, heavy and thick, giving lots of support. It’s particularly useful between the knees, an area which gets very hot and requires ventilation. Try keeping your knees apart with an ordinary pillow -good luck with that! It also keeps its shape, unlike some of the others which sag and no longer spring into shape (just like me) when used for a while. 66% of reviewers gave it five stars! 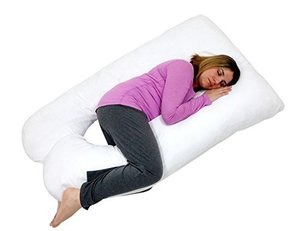 This U Shaped-Premium pillow had major rave reviews, but apparently it’s pretty big, so be prepared! Your Significant Other may be as delighted as you are so you may have to get him one too! Because it’s a contoured pillow it has extra support where you and your baby need it most, and that is of course your back and bump.

It’s u-shaped, so it gives a lot of support to the neck, upper back and head, which is useful for alleviating heartburn. (Trying to sleep sitting up with your knees bent and a pillow between them is really not for sissies, guys. Try it sometime). This item includes a pillow and an easy to wash cover with a zip. I love the sound of this one, and so did the 66% of people who rated it a five star purchase! 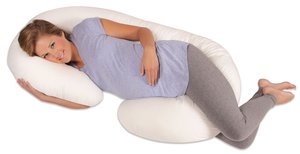 The Leachco Snoogle Total Body Pillow is one of the best maternity pillows, and one of the best sellers on Amazon.com. You can tell by the name that it’s one of the most snugly supportive around, and it does the job of the five ordinary pillows you’d need instead most efficiently.

One of the things that nobody tells you is that pregnancy is quite a sweaty business! You are, after all, carrying a big hot water bottle in front of you for nine months, so the detachable washable cover is a boon. The Leachco Snoogle Total Body Pillow can be used to support baby’s head while breastfeeding, and if you sit on it while folded up like a chair can help support your muscles while they’re recovering from the birth. 65% of users can’t be wrong when they gave it five stars! 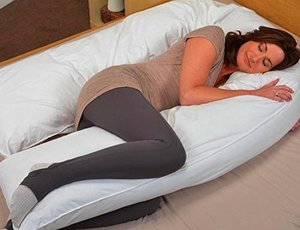 Wow! At 19 inches thick and 130 inches long this Oversized – Total Body Pregnancy Maternity Pillow is a MONSTER of a pillow! It seems to attract the men as well because of its sheer size. Despite this, the bulk doesn’t seem to be an issue, with most people finding it an advantage. Since it is so big mothers of twins like it because of the extra support it gives to an oversized bump.

I noticed that all sorts of people with shoulder and hip surgery have found it helpful in their recovery. Best one yet was the man who said it almost completely stopped him snoring! It also seems to help for period cramps and post-operative pain. In fact it has even been described as “like sleeping on a marshmallow”. It’s one of the best rated maternity pillows in my book! It must be pretty hot if 60% of reviewers gave it a five star rating!

So there you have it, ladies! These five products are the best rated maternity pillows you can find. I hope I’ve saved you the time and trouble of finding your own best maternity pillow reviews. If you are a first timer at this you need to know that the effects of pregnancy don’t end at birth. Oh no, you don’t get off as easily as that!

Your body’s ligaments have all loosened in preparation for birth and your back has taken the strain of that joyous but cumbersome bump for what seems like eternity! The best maternity body pillow can still help you, since your incredible woman’s body, amazing though it is, will take some months to recover.

Those babies don’t feed themselves, and since your sleep will be broken (even the best maternity pillows can’t fix that) then let the sleep you do get be of the best quality possible. Your maternity pillow is your pal, so cuddle it often. And by the way, after all that effort I wish you much joy with your new baby – you’ve earned it!